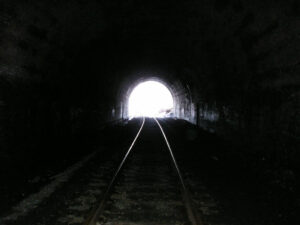 Light at the end of the tunnel?

This time now and beyond this time.

Some think that after the nightmare of the Covid-19 plandemic, the resistance and the truth-telling has been so great that the whole system under which we live is about to collapse, ushering in a bright new society filled with peace and love or at least a scenario in which parallel, alternative communities will be able to flourish. But actually, Covid was the first support act in a 13 year rolling gig. The production company, ‘CityWall Anglobal’, will put on more support acts  – (the second has just taken the stage: War in Ukraine) – until 2030 when the main act, Ahriman, will appear. This talk will explain why we are living through the most remarkable time in the last 2000 years, and how we can get through the spiritual Scylla and Charybdis of this time and beyond them, and beyond the human appearance of Ahriman. Humanity is becoming 21 and is called to take responsibility for its spirit and for its body, the planet, both of which we can now destroy or enhance. To make the choice well,  we must understand where, or rather, when we are in our evolution and also we must recognise the spiritual forces that seek, on the one hand to frustrate, and on the other hand, to aid that evolution.