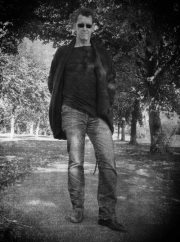 Andrew Gough has been an enthusiast of the esoteric genre for decades. He’s Editor in Chief of a newly launched esoteric and ancient mystery focused print magazine, the internationally distributed ‘Mindscape Magazine’, Chairman of The Rennes Group, Europe’s longest running research society dedicated to the mystery of Rennes-le-Chateau, and former Director of the Institute of Interdisciplinary Sciences.

Andrew’s research and writing can be found on his popular website called Arcadia: www.andrewgough.com. He has also made significant contributions to the bestselling books, ‘The Dan Brown Companion’ and the ‘The Ancient Code, where he writes about the Sacred Honey Bee, a topic that Andrew speaks about regularly on the conference circuit.

Andrew is an experienced TV presenter has made several documentaries, including the soon to be released, ‘The Truth Behind King Arthur’ for National Geographic. He also stars in the Warner Brothers esoteric thrillers, ‘The Stone’ and ‘Paranormal Haunting: The Curse of the Blue Moon Inn’, each of which are released in 2011.

Andrew moved to London from his home town of Chicago in 1996, and currently lives and works in London.

About Andrew’s Presentation: The Real Lost Tradition
Veneration of the Sacred Bee is an esoteric tradition shared by civilisations of all epochs, including the Sumerians, Egyptians, Minoans, Greeks and Mayans. The diminutive creature’s many life-affirming by-products ensured that it was deified across the ancient world, yet somehow its importance has been forgotten, despite the fact that the United States of America is founded on its principals, as is freemasonry, politics and many esoteric concepts. Today, the Sacred Bee appears to be dying. Can it be saved, and if so, what can we learn from history’s greatest ‘lost tradition’?